Above all do not cease your desire to walk.

Black Swan V 1.7_Has BP Summoned the Fires of Hell?

Has BP Summoned the fires from Hell?

its almost unfathomable what is going on.
for instance, when i see the photo in the post below and think (among many many other things_political and otherwise) about all the saber rattling with iran_the etiology is a progressive colonial intrusion. its so obvious to me that the reason these guys are taking down the first sign which says "Anglo-Iranian Oil Company Ltd" and replacing it with "The British Petroleum Company Ltd" sign is because there was a very corporate  action/purge on the part of the British that blew the Iranian involvement in their very own petroleum resources away! Why? One can only imagine_ but if one reads Buckminster Fuller's book, Critical Path, one can imagine it all had to do with lawyers and legalese_Bucky called it "Law Cap" in Critical Path_ short for Lawyer Capitalism. Its an astounding book really. He talks about how the picture of George Washington in Cambridge, in front of what appears to be the original Colonial flag of Stars and Stripes, is in fact the East India Company's company Flag! The US Revolution was financed by the East India Company as a Corporate venture!
Here is the astounding snip from the book_the point is_corporatism has been around North America since the Native Americans were given the boot! 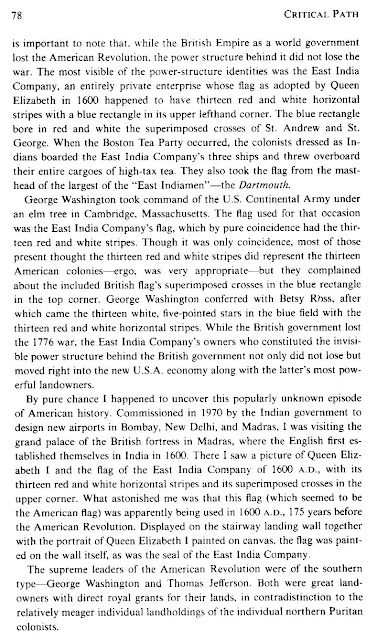 Black Swan V.9 File under_picture is worth a thousand words 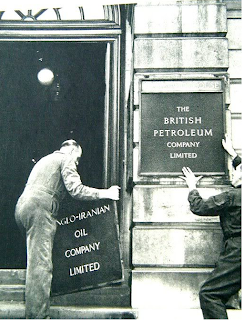 Above, the original BP name change. A few years back, they switched once again, renaming “British Petroleum” “Beyond Petroleum,” and emphasizing how eco-responsible the company was aiming to become.
http://www.elephantjournal.com/2010/06/photo-of-the-day/
Posted by J.Crow at 3:13 PM No comments: